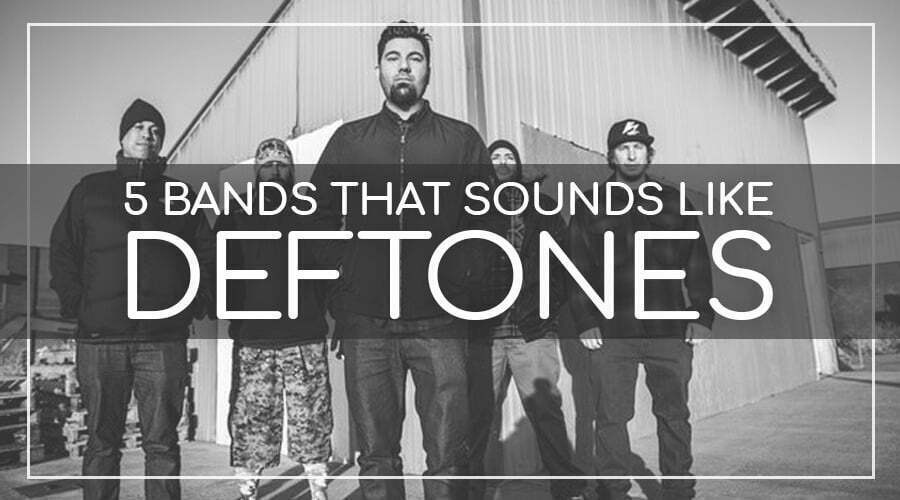 The Deftones are such a great band that they have become the benchmark. Chino Moreno’s lead vocals are instantly recognized practically anyplace, and the band’s sound is so distinct that only a few other bands in the business can come close to matching them. What was it about the Deftones that made so many other bands want to be them?

I’d say it’s the fantastic combination of terrific riffs, solid drumming, simply incredible vocals, and ambient electronic effects that makes this album so special. They’ve changed over the course of multiple albums, yet they’ve managed to maintain a distinct sound that is uniquely theirs.

They reigned the decade of the 2000s, and some bands that existed around the same time period, as well as those that have lately appeared, have a comparable level of brilliance with them. I’ve put up a list of five bands that are comparable to Deftones.

If you’ve just experienced heartbreak, don’t listen to “In Two” by PALESKIN unless you’re like me and prefer being on an emotional roller coaster while listening to music that would make me weep even more.

I only heard PALESKIN a few months ago, but I can see why some fans have compared the band’s sound to that of Deftones.

Clean voices and the feelings they create in the listener are two things that I have noticed as being similar in both bands, which I believe is a coincidence. My introduction to PALESKIN came in the form of their song “In Two,” which led me down a rabbit hole of searching for more of their material. “Where the Light Fades” and “Grey,” both from PALESKIN’s “Joy is Temporary, Pain is Constant” album, are two of my favorite songs from the band.

When I listen to the song “Grey,” I get a surge of happiness that lasts for a long time and is not fleeting. The last time I experienced something so amazing was when I heard Deftones’ “Change.”

Because there are so many bands out there doing similar types of music, PALESKIN stands out because of the quiet and raw voice.

Have a listen by visiting Spotify through this link or through the embedded Spotify media player.
https://open.spotify.com/artist/5eKP3s5CJQOYL65VzunrN1?si=NkU-H_4LR4mhi9JdZclo1Q&dl_branch=1

If I PREVAIL deserves all the attention after the sudden spike in popularity from their cover of a Taylor Swift song – remains to be discussed. At least it’s a band that isn’t trying to hide that they’re not trying anything else than being a pure metalcore band.

Their album “Trauma” might have gotten a tremendous amount of listens on Spotify, but somehow still lacks originality and even if the first song “Bow Down” gives you some hope, the song “Paranoid” is all over the place and from there it’s pretty much as good as it gets.

Don’t get me wrong, the band has more fans than many bands dream of and if you are into Bring Me The Horizon – I PREVAIL could be something right down your alley!

As a side project of Deftones, Chino Moreno established Team Sleep in 2000 in Sacramento, California, with the goal of creating experimental music that would be accessible to a broad audience.

Team Sleep’s music had a melancholy quality to it, akin to some of the Deftones’ work. It was commonly believed that Team Sleep drew significant inspiration from the band Deftones, whose frontman Chino Moreno appeared on the album.

As opposed to beginning with one ingredient and building their sound around it, they subsequently changed their style. Examples include the opening song “Ataraxia,” which had rumbling bass, computerized drumming, and light guitar strumming, heightened by Chino’s vocals, which were echoed softly in the background.

Team Sleep frequently included guests in their music, each of whom added their own distinct flavor to a song, while every song was tied together by a well-planned presentation to form their first and only album.

That practically everyone’s favorite band had to call it quits because of “irreconcilable artistic disagreements” was a sad day for music fans everywhere. Because to Incubus’s existence, I’m forever thankful, and listening to their music again transports me back to many memories and places me in a valley of many feelings tinged with nostalgia.

It’s a band that even Deftones like, which is saying something. “Two-Way Mirror” by Loathe is a UK metal band that has grabbed the attention of many metalheads, including Chino Moreno of Deftones, who claims that the band’s music is “better than all of your idiotic stuff, even mine.”

Chino must have thought there was something special about their music since he gave them such high praise. They certainly made effective use of percussion loops and strings, which worked well with the vocalist’s clear tones. Listeners have stated that they feel nostalgic after listening to the sounds of Loathe, particularly the song “Two-Way Mirror,” which they claim reminds them of their all-time favorite band, the Deftones.

Deftones have maintained high levels of both innovation and consistency over the course of their career, which is a difficult combination for many musicians to achieve. They’re one of the most influential bands in the world, and many others have drawn inspiration from them.

Deftones were one of the first prominent bands to incorporate aspects of shoegaze into their music, and they continue to be influential today. In the world of heavy music, the Deftones have had an incalculable influence. So much so that Loathe’s Kadeem France expresses his desire for his band to “mature and become relevant like the Deftones.”

Band in the Same Genre As Deftones

Every band has attempted to create sounds that are comparable to those of Deftones; nevertheless, only a select handful have been able to have the same impact on people as Deftones. They can only make an attempt.

Deftones, based in Sacramento, have been one of the major voices in alternative metal since 1988, with eight studio albums to their credit, initially exploding in popularity during the late ’90s nu-metal wave.

They achieve a mix between hard and aesthetic rock, which readily distanced them from the scene’s nu-metal peers. Their music is, to put it mildly, strange. The differences between the two aspects were at first fairly startling, but I’ve gradually come to enjoy them over the last week. Specifically, Chino Moreno’s gentle croons over the band’s dense production.

Numerous bands have ridden the rock’n’roll escalator, but few have done so with the melodrama of Deftones, whose tale of success snatched from the jaws of failure snatched from victory sounds like a particularly vivid episode of Empire dressed in board shorts rather than bling.

Genres may be amusing, hazy, and meaningless things – usually worthless boxes that we stuff garbage into only to make it simpler to comprehend for our small minds.

Despite the fact that metal, in particular, can be highly conservative and trapped in its own past, the genre has a long history of embracing different forms — from punk to goth to hip-hop to shoegaze to indie to electronic dance music and beyond.

For Deftones fans, the relationship between vocalist Chino Moreno and guitarist Stephen Carpenter is mythological: two opposing gravitational forces that keep the band’s gorgeous and bludgeoning music dangerously balanced in the middle.

Carpenter is the brazenly unreconstructed metalhead, pounding out slabs of distorted bottom end on 7- and 8-string guitars and vocally lamenting songs that aren’t hard enough. Moreno is the sonic innovator and starry romantic, with a voice that sounds misty and ethereal even when it screams—the man whose band introduced the Cocteau Twins to a generation of furious young rock radio listeners.

Moreno’s personal relationship with Carpenter is undoubtedly more intricate than that, and Moreno is definitely a metal enthusiast as well. However, the tension between musical aspects is genuine, which is why Deftones albums continue to feel dynamic and alive, whereas practically every other band originally called nu-metal has devolved into self-parodic kitsch.

The Deftones library is replete with examples of this inherent conflict, but none quite compares to “Urantia,” the third track on their ninth album Ohms. It opens with a dizzying one-one riff, preparing you for a continuous onslaught. Rather than charging forward, the song takes a sharp turn in the opposite direction: expansive and sensitive, riding a variant of the lithe, hip-hop-influenced hi-hat rhythm drummer Abe Cunningham devised around the time of 2000’s

White Pony and has been developing ever since. It’s a pleasant reversal, and it becomes something more when the riff returns—as large and booming as before, but now seductive and nimble, guiding Moreno’s airy singing through a series of pop chord changes toward a chorus that floods the room with light. Suddenly, the band’s two driving instincts become natural companions, each lifting and twisting the other like partners in the world’s most vicious figure skating performance. For the first time in years—following years of turmoil and a valiant comeback with 2016’s Gore—Deftones are making it seem effortless.

A Band To Listen to Instead of Deftones

PALESKIN has the greatest potential to exceed the accomplishments of Deftones in the future. They have managed to develop a distinct sound of their own and have since gone on to produce unforgettable sounds on a consistent basis in the short period since they made their professional debut.

We see a lot of similar bands to Deftones originate from either the coast of the US or from England. PALESKIN, however, have their roots in the south of Sweden. While Sweden might be known for other metal bands such as Soilwork, In Flames, Ghost, and Refused, PALESKIN seems to revolutionize the sound of what might become Swedish Melodic Metalcore.

Sacramento, California-based alternative metal band Deftones was formed in 1988 and has been touring the world since. Among the members of the group are Chino Moreno, Stephen Carpenter, Frank Delgado, Abe Cunningham, and Sergio Vega, among others. Chi Cheng, the group’s original bassist, fell unconscious after a vehicle accident in 2008 and died in 2013 as a result.

For many metal fans, the first thing that comes to mind is, “Aren’t the Deftones considered nu-metal?” Well, I suppose that’s the case. To a certain extent. Although they include nu-metal aspects into their song and broke through to the masses during the nu-metal era, Deftones are a unique band in their own right.

What bands are similar to Deftones?

Some bands similar to Deftones are Paleskin, A Perfect Circle, Incubus, Team Sleep and Loathe are some bands that are comparable to Deftones.

What musical genre does Deftones belong to?

Click the link below for more information on how you could contribute to the site!

Daniel Turner has been working as a writer, author and journalist for the last 10 years. Daniel has a diploma from Georgetown University in Master of Professional Studies in Journalism. and have been working with music coverage and interviewed bands such as Ghost, Metallica, Iron Maiden, and Bono from U2. Daniel finds his drive working for similar-bands.com by being able to continuously source and find new bands and artists. Listening and analyzing music is his passion - which he loves to combine with his own style of writing. Daniels's favorite bands at the moment are August Burns Red, Architects, and the up-and-coming Paleskin.