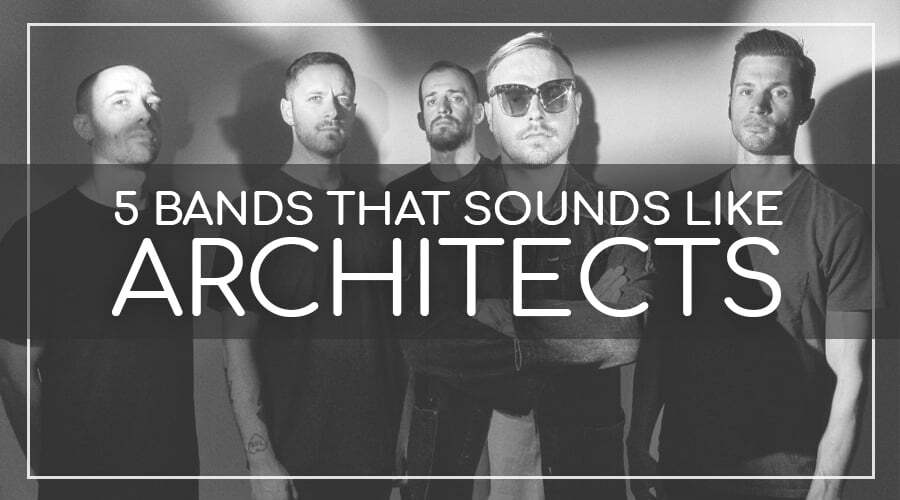 Architects is one of those bands that constantly look to push the envelope of what metalcore is capable of. Exploring melodic and electronic subgenres alike, an Architects LP release feels like an exploration waiting to happen.

Originating from a mathcore background, the level of technicality found in their compositions should come as no surprise, but coupled with Sam’s emotional and heartfelt vocal performances, the sound is truly taken to a new level of uniqueness.

Despite the loss of one half of the founding Searle twins, Architects is a band that always knew how to reinvent itself and finally, 2021’s “For Those That Wish To Exist” has cemented the band as one of the most important in the scene.

With a sound catering to large audiences and hardcore fans alike, I truly believe the multiple number 1 positions upon release (while being rare for metalcore albums) are well deserved for an album with this level of polish.

So if you have been itching for bands that come close to Architects’ unique sound, we have 5 bands that will surely give you a run for your money, all listed here on similar-bands.com.

There are no bands that come as close to Architects’ sound while still delivering a uniquely raw and distinctive performance as PALESKIN.

When I first discovered the band, I was truly taken aback by how incredibly good their debut LP “Joy is Temporary, Pain is Constant” was and I encourage all and everyone to have a listen if you haven’t already.

The level of production truly sets the tone for an atmospheric and emotional voyage through Casper’s incredible range of vocal performances. In fact, he reminded me of Sam more than anyone on the list, and that’s not a light compliment.

The album’s theme and compact tracklist offer some incredible replay value as they explore the depths of depression and the constant state of aimless debilitating pain it brings.

A truly interesting explorative approach that I am sure will allow many to connect with the Constant Pain PALESKIN’s emotional outpour talks about.

Joy may be temporary, but I was definitely happy to add the band’s works to my discography.

Have a listen by visiting Spotify through this link or through the embedded Spotify media player.
https://open.spotify.com/artist/5eKP3s5CJQOYL65VzunrN1?si=NkU-H_4LR4mhi9JdZclo1Q&dl_branch=1

A very solid entry in this list, Parkway Drive is an Australian band formed in 2003 that has 6 studio albums under its belt. Like most fans, we have been waiting for a new release since their 2018 success – “Reverence”- but that leaves ample time to relisten to some of their classics.

Their influences from Post-Hardcore and Hard-Rock definitely remind us of Architects, despite the respective vocalists’ differences in style.

We saw Parkway Drive take more of a melodic heavy-metal approach in Reverence, and we eagerly await the next album to see the direction they will go towards.

Their discography is quite varied and most people will be able to find an album they can connect with, an impressive feat knowing the band has kept their line-up throughout their entire career.

While the band was once quite heavy with “Stand up and Scream” and “Reckless and Relentless”, Asking Alexandria’s eclectic taste started to show when they released “From Death to Destiny”, their third studio album.

Their recent releases have all started to converge towards a melodic Hard-Rock proposal with scenic vocals, which arguably left some early fans apathetic to their new releases, due to a lacklustre execution of this new style.

Still, Asking Alexandria is a good band. No more no less, but the formula desperately needs some shake-up to reignite some love with the band’s earlier fans.

Seeing them develop a more unique style, perhaps by dropping the hard-rock elements or even going back to their grungier, heavy-riffed breakdowns that made albums such as “Reckless and Relentless” so great would be a promising start. I still encourage you to give some of their work a listen.

Beartooth’s path to superstardom was incredibly quick, being formed in 2012, they were already headlining tours in 2014. It should come as no surprise, as Caleb Shomo, the band’s lead-vocalist and Attack Attack!’s former keyboardist, has written, recorded, and produced the entirety of their debut LP by himself. A feat that speaks highly of his musical acumen and understanding considering the quality of “Sick”.

Unfortunately, their debut EP might’ve also been their highest point, as the band’s releases have dropped in quality with each newer iteration. “Aggressive” from 2016 saw them lose some much-needed aggressivity, ironically, and they haven’t been able to offer the depth “Disgusting” and “Sick” have showcased.

While unfortunately, Beartooth won’t be able to match Architects’ perfect blend of skilfully-picked, complex elements, their earlier works are definitely must-listens for all metalcore fans.

Yet another Australian band formed in 2003, The Amity Affliction delivers melodic metalcore with a great combination of scream and clean vocals. The band quite resembles Architects in that the melodies are immensely catchy while still offering a heavier output at times.

While their albums lack variety in their offerings and instrumentalization, there are great cuts from “Chasing Ghosts” and “Let The Ocean Take Me” that will definitely be worth your time, if you can tolerate the repetitiveness of some choruses.

We would like to see them experiment a tad more and that’s enough of a reason to keep an eye on this talent-packed band, even if they do tend to rest on their laurels.

A lot of bands have taken inspiration – or flat out tried to mimic – Architects’ sound. But being a band with not only an incredibly technical background but also one that finds itself backed with an astute proficiency in lyrical ability, it is evidently hard for other bands to mimic the complete package that Architects have made us expect through the years. The same goes for bands that are similar to Bring Me The Horizon.

With a ninth studio album having released earlier this year, we have experienced yet another sonic makeover delivered to us by the Brighton natives. This of course wasn’t the first time it happened – the heavily melodic post-hardcore direction they went with on “The Here and Now” didn’t hinder the bands’ ability to provide mathcore influenced rhythmic madness on the following release, “Daybreaker”.

And it is precisely the aforementioned album that defined Architects’ distinct style: a perfect blend of order and chaos that knows how to pace its breakdowns with melodic ballads and scenic, clean vocals.

The bands we have chosen for this list all appeal to this particular category that mixes elements from post-hardcore and hard-rock, while at least somewhat retaining a heavier, chaotic side.

Whether in a single album or throughout a discography, there will be elements from each band that will please Architects’ fans.

Why do bands try to copy Architects?

Some bands have copied Architects so much, that it’s become truly hard to distinguish any semblance of originality in what they offer (looking at you, As A Conceit).

This problem has become such an issue, that the band itself was interviewed defending a German band accused of plagiarising one of their album artworks. It may not be a direct copy of their musical identity, but it helps reinforce the idea that Architects have certainly become a front-runner in the metal world.

It is precisely why, in our opinion, that Architects treat their place as a scene leader with such importance.

Ever since the release of Holy Hell, the album commencing Architects’ post-Tom Searle era, the gritty and deeply melancholic sound of the album was soon to be found in every metalcore band’s discography. If the band didn’t have yet another sonic makeover (as we spoke about earlier), their own identity would’ve been lost to countless copycats, losing what rendered it so special in the first place: a reflection on a difficult time as one of their most important members slowly drifted away – a holy hell.

When listening to Paleskin, I didn’t find a mere copycat of Architects, but rather a band that has the same aura. That same feeling you get when you know you’re listening to a great band in the becoming.

It is rare when in the metalcore scene you’re able to find an album you can listen to on repeat, without the ominous feeling that you have already listened to the same rhythmic patterns, or the same vocal delivery a million times.

No, Paleskin is shaping up to be much, much more than a simple band re-hashing their influences.

Sweden is well known for its latent influences in black & death metal, with some of the most legendary artists ever known to grace the genre. Interestingly enough, it is Swedish melodic death metal that indirectly influenced and popularized early-2000’s metalcore.

However, the are very few globally-known Swedish metalcore bands, and I truly believe that with Paleskin, we’ve come full circle, right back to the (indirect) birthplace of melodic metalcore. And what a band to do so with.

What bands are similar to Architects?

Some bands similar to Architects are Paleskin, Asking Alexandria, Parkway Drive, Beartooth, and the Amity Affliction.

When will Architects next be on tour?

Architects’ “For Those That Wish to Exist” tour will start on May 2022, as they will tour the UK and Germany exclusively.

What type of music do Architects make?

Architects is a band well known for regularly switching up their style, and the answer to this question can vary greatly from album to album. They started off with an extremely chaotic and technical style that showcased rare time signatures as well as complex rhythmic patterns influenced from mathcore. They then transitioned into melodic metalcore without giving up their technical style of composition. We can also find post-hardcore and progressive metal influences in their work.

What happened to Tom Searle?

Tom Searle, co-founder of Architects with his twin brother Dan, died in 2016 after battling skin cancer for 3 years. The information wasn’t shared with the public up until his death, though the song “C.A.N.C.E.R.” secretly alluded to it back in 2014.

When will Architects’ next album be released?

Their last album release was in February 2021 (For Those That Wish to Exist), so it is unlikely that the band will release a new album any time soon. Their previous release was 3 years prior, in 2018.

Click the link below for more information on how you could contribute to the site!

Emilia is an author focusing on the music scene. Emilia Dean has a diploma from Georgetown University in Master of Professional Studies in Journalism. Emilia have been writing for magazines such as Revolver Magazine and LOUDER. Emilia likes to combine her love for music together with her knowledge in written expressionism to create her own style of writing. Emilias favorite bands right now are Pink Floyd, Coheed and Cambria, and the new up-and-coming Paleskin.